Giving Back with the Edmonton Oil Kings 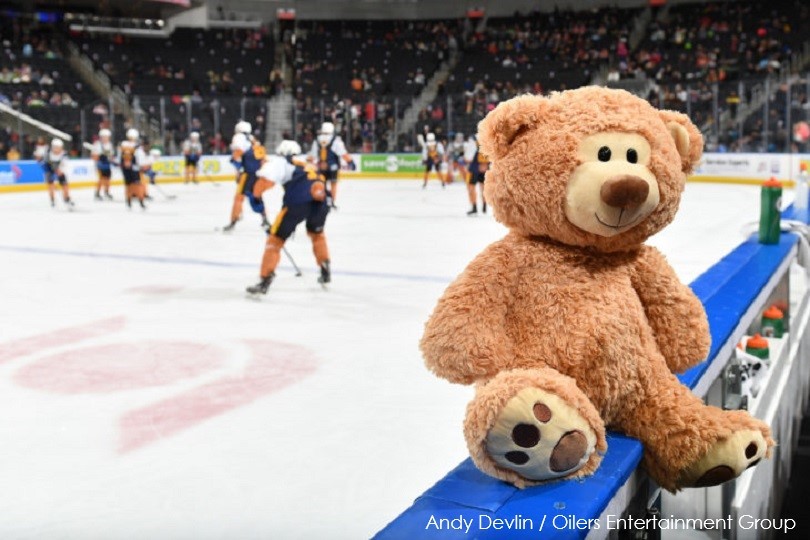 Thousands of teddy bears rain down onto the ice from above. Mountains of stuffed animals so high you can literally dive into them. In a tradition as synonymous with the holidays as decorating the tree, visiting Santa, or putting up lights, the Teddy Bear Toss presented by The Brick has become one of the Edmonton Oil Kings most anticipated and attended hockey games.

Brookfield Residential has a long-standing relationship with the Edmonton Oil Kings with the Brookfield Junior MVP partnership. Children who live in a Brookfield Residential community can either be nominated by a resident advisor or complete an online submission form for a chance to participate. The Junior MVPs are randomly selected for every home game and get the opportunity to see behind-the-scenes at Rogers Place where the games are played. The kids get to fist-bump the Oil Kings before the game, skate around with the team during warm-up, and stand on the blue line while the national anthem is played. They are also featured by the announcer, shown on the big screen, and when the game is done, they go home with their Brookfield Residential/Oil Kings jersey.

This last December, the Teddy Bear Toss presented by The Brick was truly one to remember. During this sold-out game against the Calgary Hitmen, the fans tossed a record-breaking 16,491 teddy bears on the ice to be donated to the Stollery Children’s Hospital Foundation and benefit families in need in the community. As a Brookfield Junior MVP for that night’s game, Oliver Bosma was selected to attend this once-in-a-lifetime game benefitting the hospital, a place that has a special significance to the Bosma family. At 15 months old, Oliver was diagnosed with Type I diabetes. He continued to get sicker and sicker and at 21 months they discovered a large tumor wrapped around his brain stem. He was immediately rushed to Stollery and after an intensive, but highly successful, surgery Oliver made a full recovery and is now a happy, healthy young boy.

Though creating communities is the core of our work and the essence of the Brookfield Residential culture, our commitment to community extends beyond that. We care deeply about the areas in which we work and believe in giving back in any way we can. We also believe that when we make a positive contribution to the quality of life and well-being of members in the community, it benefits many generations to come. This is why we are so passionate about creating the best places to call home.